After a journey through South Germany, Austria and Hungary my wife and I arrived in Rosia Montana in Transsilvania. We took part in a week-long protest festival there against the project of a Canadian Gold Company to take away four or five mountains around Rosia Montana to extract gold with the help of Cyanide. The Romans and for sure the people of the civilizations before already were successfully mining for gold and copper there. And of course in the Middle Ages and in the Habsburg time and in the last century there was gold mining there too, but nobody has yet damaged the region and its population so much as is intended to do now. Part of the festival were excursions that showed us many interesting things.

One very interesting thing was added to all the terrible facts that our visit there was about: We had learned before that Rosia Montana is in the middle of a region between the northern parts of Greece and the Ucraine, where between 6 and 3 thousand before Christ there was a high culture existing long before the Greek one. I had been happy enough before the journey to have heard of a book that I own in the meantime written by Harald Haarman. He tells in it about the lots of research that was done in the last decades on „Das Rätsel der Donauzivilisation – Die Entdeckung der ältesten Hochkultur Europas“ including a writing system that is older than the ones in Mesopotamia and Egypt! 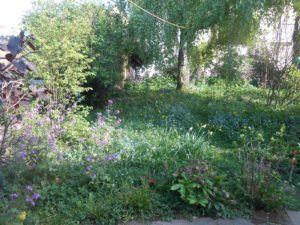